Trump Tracker is dedicated to track the Trump administration’s policies and its results with objectivity in CHARTS. It tracks the progress of President Trump’s campaign promises by presenting executive orders, legislation, and budgets. It then interprets and tracks the historical impact on economy, jobs, border security, immigration, climate change, election results, job approval rates, and more in easy-to-read charts and maps.

★★★★★
“This is the first time in my lifetime 67. That I am able to find anything about our gov-I would love to see apps like this at local and state level gov also.” – Wdtractor1

★★★★★
“This is one of, if not the best app for getting the ‘411’ on what’s ‘really ‘ going on in Washington. NO SPIN TWITTER FEEDS , NO TRUMP HATING COMMENTS FROM TRUMP HATERS JUST pertinent information from everyone in his cabinet that matters! A TRULY GREAT APP!” – Babyman913

★★★★★
“This app is very useful and quite enjoyable. Trump supporter or not, everyone should have this app” – Chxrliee

★★★★★
“This app has everything about Trump you could ask for. It has all of his Twitter feed, statistics on polls, a listing of his executive orders and more. Best 99 cents a month deal out there!” – Pamera717

★★★★★
“I found the app very useful. A great way to get news about our government at work. Many of these updates do not make the main stream news.” – Roger’s Account 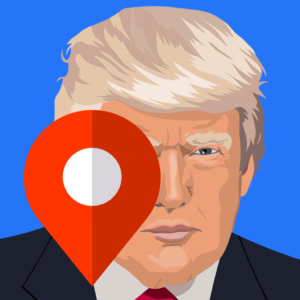